It has been glorious...

We may have had a stinking hot summer, but so far our fall is more than making up for the icky summer weather. It has been gorgeous.

I have been trying to get the curly tails out to the park as much as possible. There have been a great deal of other dogs for the social basenji butterfly to play with while the more cautious shar pei observes.

Unfortunately no one holds still long enough for any pictures...

On October 5th it will be time for a trip to Chicagoland for Menchi's appointment with Dr. Vidt. We shall find out if our babygirl needs eye surgery or not. Watson gets to come along for moral support. We also have arranged to visit our Chicagoland peeps.

On October 7th we are hoping to go to the Basenji Club of Southeastern WI's Fall Picnic. It will be held at the Lure Coursing Fanatics and there shall be free coursing. I want to see what Ms Menchi makes of the lure... Watson will no doubt squee with delight :)

In which Watson amazes and astounds...

We had a plumber come into the house today as we were blessed with a bit of a plumbing emergency.

The dogs as always were thrilled to have a new person to poke at. The guy took their attention in good humor. He had never seen a basenji before and I mentioned to him to keep an eye out as Watson is a bit mischievous.

Menchi watched from the living room and Watson of course was right up in the man's business supervising.

I went and was working on some stuff in the kitchen.

Suddenly I hear the guy go "Hey!" and start laughing... I came into the living room to find Mr Watson on the couch with a screwdriver that he had poached from the plumber and dragged off. The man was pretty entertained by the whole thing. He was amazed when I told him that this is not an isolated thing. I mentioned that as a puppy Watson regularly stole Sabe's wallet and tried to make off with it :D

When things go bump in the night...

Here is what happens...

The paternal body gets out of bed to stumble to the restroom. Basenji lifts head, blinks sleepily, contemplates stealing the warm spot left behind, then creeps back under blanket and leaches my heat. The Shar Pei continues to snore blissfully.

The maternal body exits the bed to stumble to the restroom. Both dogs come awake the instant I leave the bedroom. Two dogs congregate by the bedroom door to await my return. The basenji makes sure I know that they know by periodically scratching noisily at the door from his side. If I delay too long and go over my alloted time, to say pet the cat, I can hear pacing and grumbly basenji noises drift down the stairs.

I return to the room to have a basenji immediately check my credentials. Then the shar pei cleverly positions herself to block me/ trip me on my way back to the bed in the dark room. I pet the shar pei and she returns to her spot and resumes her beauty-sleep. The basenji meanwhile occupies my spot on the bed and needs to be jostled gently to move over. I settle down. The basenji does the patented doggy sleep dance...lays down...gets back up and asks to go under the blankets. The sleep dance happens again...the basenji resumes sleep with heavy sigh.

Life is hard when you are a little dog!
Posted by Moth at 11:47 AM No comments:

Ode to my Basenji

I want to talk about Watson today :)

Basenjis are unusual little dogs. I often meet people that don't know how quite to take Watson. To me he does not seem that odd, but I do admit that sometimes he is more difficult to read than most dogs. It is like being a primitive breed he speaks dog, but with a somewhat different dialect :)

That being said he is also one of the sweetest dogs I know. A spaz at times, but also fun, endlessly clever and entertaining.

It is said that Basenjis are aloof, but it is more that they are often not overly demonstrative in their affections. Watson for one loves to touch. He likes to cuddle up and lean against me. His main way to express joy is his yodel. This noise has startled people that never heard it before. I have had to assure friends that the loud "Baroo" is a good sound.

We do call him Snark Monster and Dragon Dog... Like many of his breed he makes his opinions known. He does not appreciate being woken suddenly, startled, forced, or handled roughly. Me, I like a dog with opinions and a bit of spunk.

Watson definitely has his on mind on many things. It makes training "interesting" at times. He likes to interpret, embellish, and, improve on commands (at least in his mind). Also he wants everyone to know that stays are for suckers! 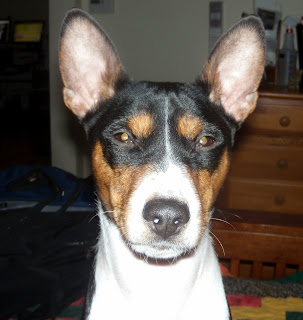